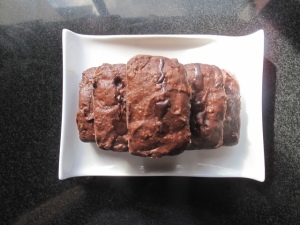 First off, I would like to apologize for my rantings last week.  Anyone who is a regular reader will know that I can really go off the deep end when I am frustrated and those quail eggs had me frustrated to the point of distraction.  I received a nice email from Woody saying that he and Rose were in tears of laughter after reading my post and he related a similar story about his quest for duck eggs while testing  a new recipe.  It was nice to hear that I am not the only one who gets totally frustrated with these things at times.  In hind sight I guess I did get a bit rowdy about it but I truly was irritated and I didn’t really enjoy the cake.  With that being said, thank you Woody for your email and just so you know, my book is still intact as I did not rip the page out.  And, I now know of about 37 sources for duck eggs if your still looking for them.

Now, on to this weeks recipe.  I have wanted to make these brownies for a very long time, but it seems like every time we have a free choice week, I seem to be suffering from chocolate overload and just look for something that isn’t chocolate. That wasn’t the case this week and Norman was having one of his rare brownie cravings so this was the perfect week for me to try these.   I have always been rather indifferent to brownies.  Not that I don’t like them, because I do, I have just never gotten into the whole, dry and cakey versus moist and fudgy argument.  To me, a brownie is a brownie and if they are around, I will eat them no matter what category they fall into.  I found these to be a bit on the moist fudgy side with sort of a cakey exterior.  At any rate, I liked them.  The ganache plugs were a nice addition although, I admit, not at all necessary for the enjoyment of these little morsels.  Definitely good and for the chocolate lover in everyone.  Let’s bake

These were very very easy to make.  Toast the nuts.  I substituted walnuts for pecans as Norman hates pecans and they were for him.  Melt butter and chocolate and set aside.  In the bowl of a stand mixer, combine cocoa and sugar and then add the butter mixture and blend.  Add the cream cheese and blend, then add the flour and vanilla and blend until combined.  Using a piping bag, fill the molds 3/4 full and bake at 235 degrees for 20 minutes or until done.  While the brownies are baking, make the ganache using your favorite method and have it ready in a piping bag.  When the brownies are done, poke three evenly spaced holes all the way through the brownie and using the piping bag, fill each hole with the ganache.  Allow the brownies to cool completely in the pan and then unmold and serve.  Delicious. 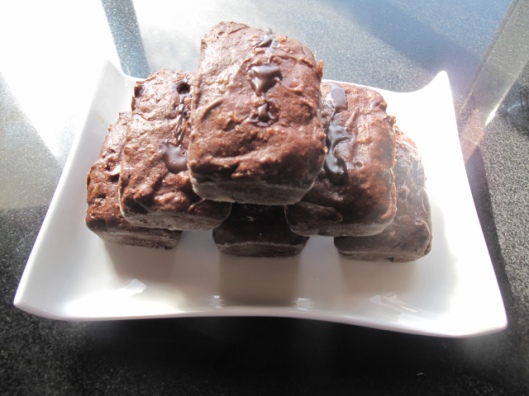 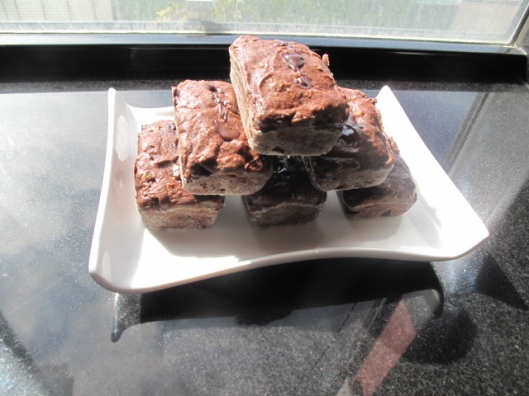 Next Up:  Sticky Toffee “Pudding”

No Cake Mixes Ever